Following in the wake of Thunderbirds, the vehicles of Captain Scarlet and the Mysterons are just as cool, but also reflect the more realistic approach taken to the design and feel of the series. We love the machines of the Spectrum organisation so here are our favourites:

The Angel Interceptor jet fighters are a formidable opponent against the Mysterons. Piloted by Destiny, Symphony, Rhapsody, Melody, and Harmony, the Angel aircraft are capable of flying at 3,000 mph and launch directly from Cloudbase, making them operational in a matter of seconds.

Also known as the Spectrum Saloon Car, this bright red vehicle is the commuter car of Spectrum. It comes in handy for high-speed pursuits and also transporting agents from A to B in low-risk environments. The vehicle’s bright red exterior may not be subtle, but it lets everyone know that Spectrum are on patrol. 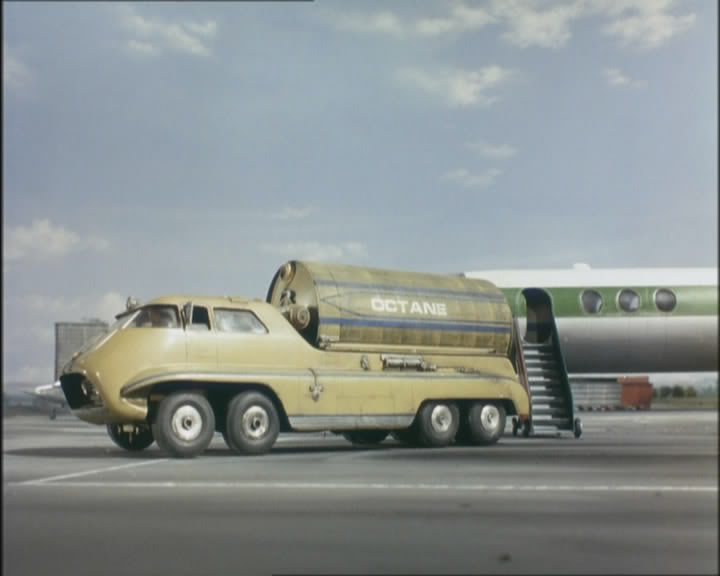 On the outside it looks like an ordinary civilian gasoline tanker, but on the inside this vehicle is equipped with a top secret conference centre which provides safe transportation for VIPs and Mysteron targets. Assuming the Mysterons don’t want to target bright yellow fuel tankers, this is an ingenious way of transporting people in safety and comfort.

The Magnacopter only appears once in the series in the episode The Trap. This is a real shame because we think Mike Trim’s design is great. The craft is piloted by Symphony Angel and is used to transport delegates to the International Air Conference at Glen Garry Castle. At approximately 200ft long it is the largest helicopter ever built and is essentially an airborne version of Spectrum’s Maximum Security Vehicle.

A wise petrol pump attendant once said: “It must be tricky facing backwards and driving by TV monitor.” While that line may have been the clunkiest piece of exposition ever written, it did inform the viewer that the Spectrum Pursuit Vehicle designed by Derek Meddings was something very unusual and special. The reveal doesn’t fail to disappoint. It is an absolute bull of a machine which has the strength to stop a plane, the firepower to take down a castle, and the fastest ejector seat on TV which gets Captain Blue to safety whenever Scarlet is feeling particularly daring that day. SPVs are stationed all over the world in secret locations, ready for Spectrum agents to request in combat situations or on other dangerous assignments. The SPV is the flagship of the Captain Scarlet fleet of vehicles and has been captured in toy and model form many times.

That’s our top 5, but which are your favourite vehicles from Captain Scarlet and the Mysterons? Let us know on Facebook or in the comments below!