Stingray‘s Captain Troy Tempest is one of the most famous Supermarionation characters for his heroic good looks and distinctive features based on the actor, James Garner. However, behind the character is also a great voice which was performed by the often under-appreciated actor, Don Mason. He portrayed Troy in every episode of Stingray and also gave his voice to a number of guest characters throughout the series.

Don Mason was a Canadian actor born in 1929, and who sadly died at the age of 50 in the year 1980. Little has been published about him or his work on Stingray. When casting their Supermarionation shows, Gerry and Sylvia Anderson were particularly on the look out for Canadian and Australian voice artists, as they were thought to be good at a variety of accents. The story behind the Andersons’ casting of Don Mason as their leading man remains a mystery, but they certainly made a good choice for the part of Troy. Don was also able to alter his voice slightly when playing guest characters in the series, although his smooth tones are often recognisable. He was not called back to appear in later Supermarionation series as many of the Andersons’ voice artists were. This could be because his voice was too recognisable as Troy Tempest, or it could simply be that Mason had moved back to Canada at the end of the series.

Unfortunately, Don’s film and television career beyond Stingray was not all that prominent, with Troy Tempest often listed as his biggest role. He can be found in a few other animated and live action parts here and there if you look hard enough.

He featured in an episode of The Forest Rangers called The Bear Rug. This is the best opportunity currently available to see Don in a live action production. To see Troy’s distinctive voice coming from a real person is quite a spooky experience.

Interestingly, Graydon Gould, the voice of Mike Mercury in the Supermarionation series Supercar, also features in The Forest Rangers. He plays the character of George Keeley in the series and is the first person you see getting out of the truck during the opening titles.

Even more of a coincidence is the fact that Don Mason and Graydon Gould also both appeared in the same episode of the 1962 BBC TV series Suspense. Gould played Major Peter McMahon, while Mason played a co-pilot.

If that weren’t enough of a coincidence, Don Mason also acted alongside his Stingray co-star David Graham in an episode of the 1957 ITC Entertainment series, O.S.S. David Graham played a pilot while Don played his co-pilot. The episode was entitled Operation Yo-Yo

Don also lent his voice to the Marvel Super Heroes cartoons of 1966, although it is uncertain which character(s) he played.

For most of the 1970’s, Don Mason’s filmography is a blank. Towards the end of his life he featured in three animated TV Movies about Noah’s Ark. Click here for a brief clip of Mason voicing a polar bear in The King of Beasts from 1977.

Sadly there are only a few other small film and television roles associated with Don Mason. He could, of course, have been uncredited for a number of other appearances which would be very difficult to track down. There’s also a strong possibility that a lot of his acting career was spent working for theatre and radio. There is, however, one other curiosity that we’d like your thoughts on. Someone by the name of Don Mason released a Christmas single in 1971 which you can listen to here. The question is, do you think this is the same Don Mason that voiced our favourite aquanaut? We’re a tad skeptical. 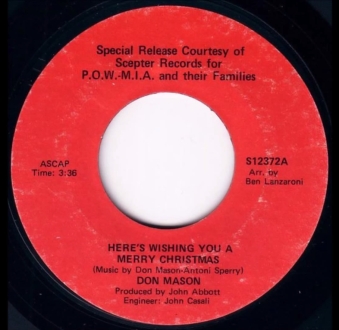 Although for most of his television acting career, Mason was relegated to the background, he shines superbly in Stingray and gives Troy Tempest a wonderful amount of character and personality. One moment he could be heroic and quick thinking, the next, sulky, jokey or romantic. We can only hope that Don Mason was proud of his place in history as one of the world’s favourite puppet characters.

Do you have any more information about the actor, Don Mason? Would you like us to focus on some more Supermarionation voice artists in the future, and if so, whom?

2 thoughts on “The Voice of Troy Tempest: Don Mason”