Those of you that attended Andercon 2015 may recall too nutty people walking around looking very perculiar indeed.

Somehow I managed to convince my girlfriend, now wife, to dress up as one of Gerry Anderson’s first puppet characters, Twizzle, while I took on the role of Torchy. The intention behind this was simply that we knew no-one else would dare to cosplay as this dynamic duo. We even put together a little teaser video to ensure we didn’t surprise anyone too severely.

The costumes were a lot of fun to put together, so today we’re sharing with you the method behind the madness.

Twizzle – The Adventures of Twizzle 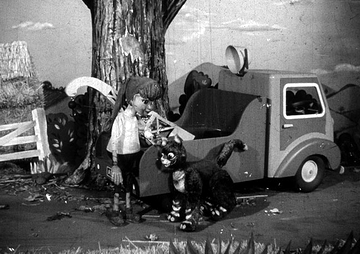 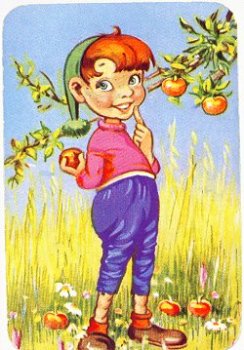 This special toy character was created by Roberta Leigh and brought to life by Gerry Anderson and his team at Islet Park in 1957. Twizzle had the incredible ability of being able to extend his arms and legs to climb and reach high up places. 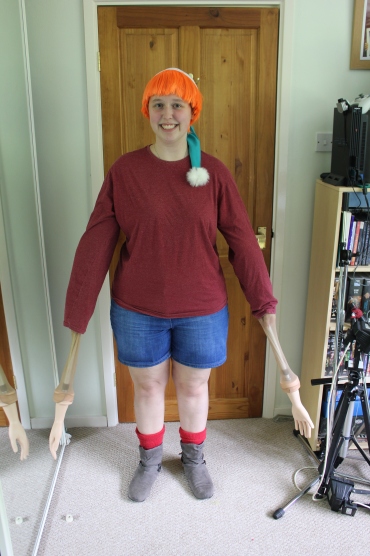 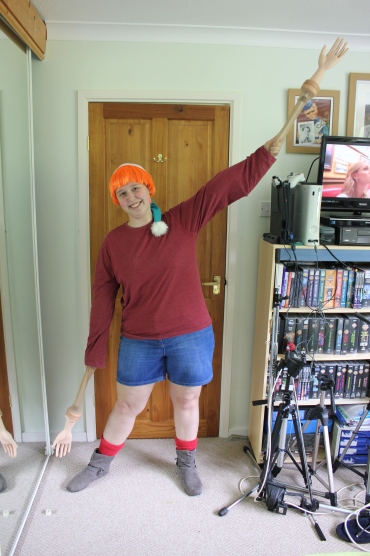 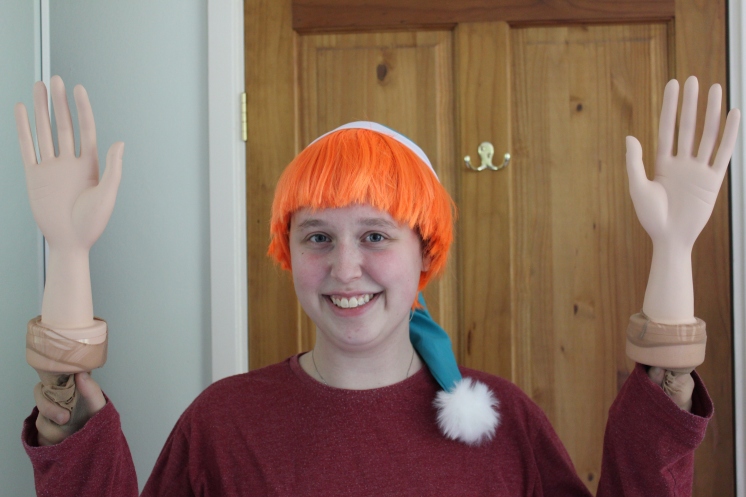 The colours for this costume are based on illustrations from merchandise as well as the Pelham puppet. Starting with the basics we already had a dark red shirt with long sleeves and some blue denim shorts. We managed to dig out some long red ski socks from a skiing holiday many moons ago. For footwear we went for some grey boots that we already had, as opposed to the brown shoes that can be spotted in the illustrations. Then we looked to eBay to get an orange wig and a green Santa hat which was particularly difficult to find and stood in for Twizzle’s sleeping hat.  The orange wig was expertly trimmed down to look more boy-like and to draw attention to Twizzle’s long fringe. The costume was looking good, but it needed something special – some functionality, if you will. We returned to eBay and found some manicurist’s training hands which very luckily had a holes in the bottom of them. Once they had arrived from Hong Kong, we dismantled a camera tripod with telescopic legs and secured them to the hands using those aforemetnioned holes. To disguise the tripod legs we adapted some regular tights and placed them over the wrists of the fake hands and over the costume wearer’s arms.

This did render my wife’s own hands unusable while wearing the special arms, but on the plus side she could astound and amaze convention attendees by flinging her extendable arms out in an exciting fashion. Unfortunately our limited budget did not allow for hydraulic extendable legs, but that aside we were incredibly pleased with the way this turned out. Unfortunately we weren’t quite prepared for the humidity of that June weekend so the wig didn’t stay on for long! We also went for some more comfortable shoes! 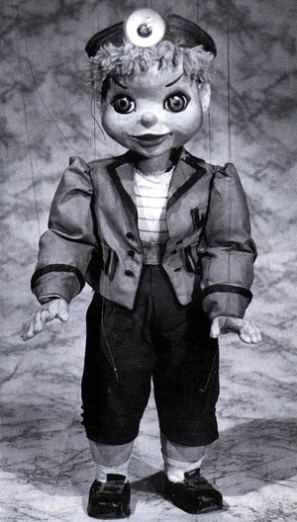 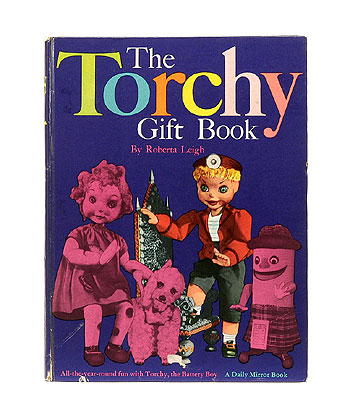 When Mr Bumbledrop was feeling lonely, he decided to build himself a toy boy… a boy that’s a toy that is… anyway, Torchy had a special light in his hat that could shine anywhere… and a creepy voice that will haunt your dreams. 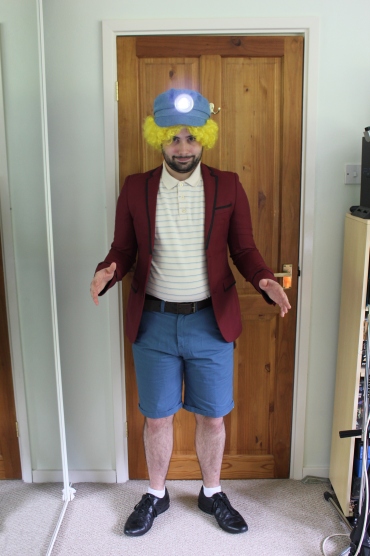 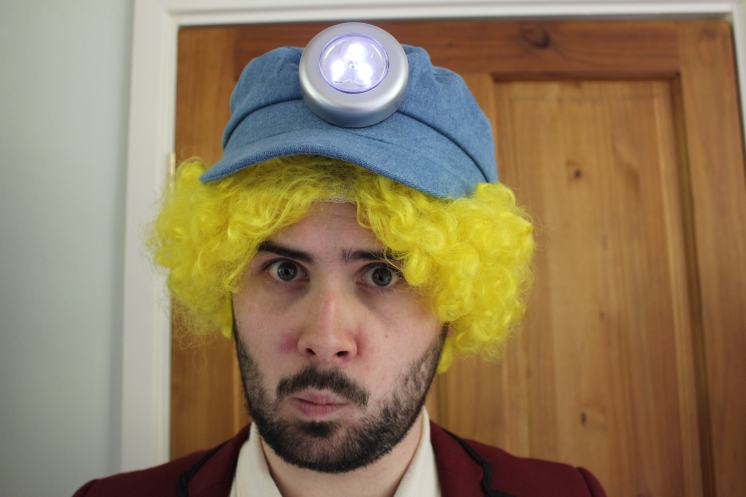 We loosely based the colours of this costume on illustrations from books and the Pelham puppet. We started with some blue shorts, a belt, white socks and some black shoes all of which we already owned. The stripey polo shirt was purchased from a charity shop. The dark red jacket was a bargain from eBay which was sold cheap due to slight damage that was barely noticeable. The black piping on the lapels and pockets was kindly added by my skilled mother. Believe it or not we already owned the curly yellow wig. Torchy’s hat caused a bit of trouble because we could not find anything that resembled his oddly shaped headgear which could also easily house a light. So with a little artistic license we found a blue school cap on eBay and settled for that. The last step was to add the same exciting functionality that the Twizzle costume had by working out a way of giving Torchy his special beam. This was ultimately achieved using a Poundland, battery powered LED spotlight which was attached to the hat by drilling out the back of the light and cutting a hole in the hat and putting a split pin fastener through. We elected to not shave my legs or facial hair to achieve the full toy boy effect – deciding instead to tell people Torchy had been having a rough few years…

At the event itself I was also feeling the heat under that wig. The jacket also turned out to be many sizes too small for me and caused a certain amount of discomfort! You’ll also notice that we decided to go for a different shirt with more defined stripes.

Despite the humidity, we had a great time cosplaying at the event and it was an absolute delight when people actually worked out who we were supposed to be! We’re by no means seasoned cosplayers but we had a lot of fun. The highlight for me was sitting for a photo with the four Thunderbirds voice artists, Shane Rimmer, Jeremy Wilkin, Matt Zimmerman, and David Graham, while wearing the costume. Needless to say they were a little perplexed by my choice of outfit and for some reason I decided not to explain that I was wearing a costume. I hope it was obvious.

Share your own Anderson cosplay experiences with us! If cosplay is your cup of tea, head to the Operation Cover Up – Anderson Costume Group on Facebook.