An excerpt of a diary kept by rogue agent, Captain Black, has been recovered at the site of the latest Mysteron attack. We have combined the excerpt with Black’s social media activity to create a full report:

Yesterday was a bit difficult if I’m honest. That blasted Captain Scarlet turned up to deactivate the bomb in the World Capital Building just before it went off. If I’ve told the Voice of the Mysterons once, I’ve told them a thousand times, we need to stop telling Spectrum what we’re going to do before we do it. I know our threats sound very impressive and scary but how on Mars are we supposed to get anything done if we keep giving Spectrum a head start?

Anyway, after that disappointing outcome I had to get away from it all. 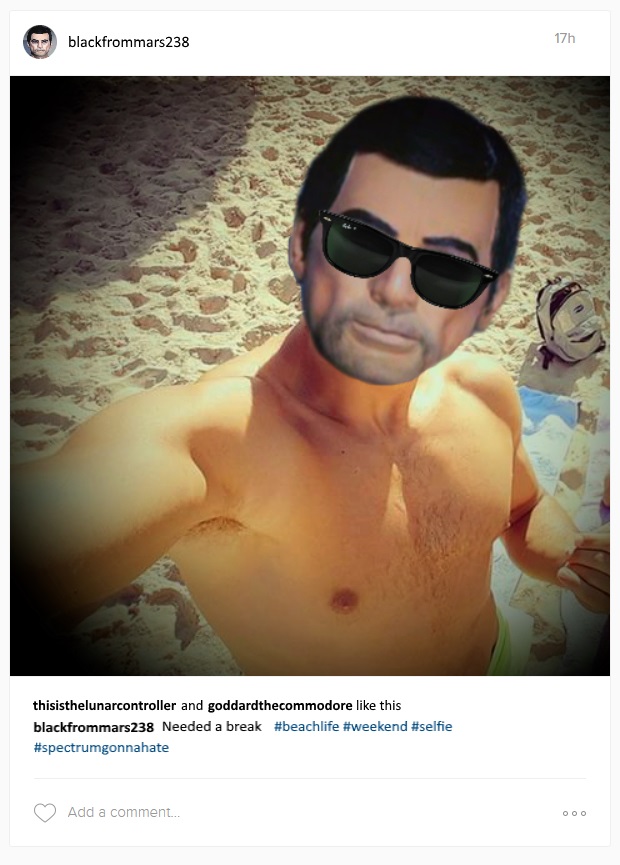 I went to the beach to clear my head. I wish I could tan more easily but that’s what being mysteronised does to you…

While laying in the sand I spotted a girl swimming in the ocean. She was wearing a long, beautiful dress but that didn’t nothing to hinder her movement in the water. As she came out and walked up the beach I couldn’t help but stare. She had long, flowing, green hair and was quite simply the most beautiful woman I had ever seen. I was feeling daring. I walked up to her and asked if she was with anyone. She said nothing and kept walking. So I stayed with her. I introduced myself and tried flirting a little but she continued to ignore me. Then this other guy with dark hair came towards us looking absolutely furious.

“Hey you! Leave her alone,” he instructed firmly. He said something about setting a bunch of wasps on me if I didn’t stop bothering her so I quickly left the beach. But I still think I made a connection with that girl… she didn’t say a word but I felt that what we had was real.

So I went back to my apartment, put on some Netflix and relaxed for the rest of the afternoon.

After that I had the leftovers from Friday’s Chinese takeaway for dinner and watched the news. Checked with the guys up on Mars that Trump is definitely nothing to do with us…

Suggested course of action: Ask all social media networks to ban Captain Black before the public start to actually pay attention to him.

One thought on “Captain Black’s Day Off”