The simplicity of the format, the epicness of the theme song, and the charm of the show as a whole makes Supercar a firm favourite of mine. For those that find the cowboy series Four Feather Falls a little far removed from the action and adventure that they expect from an Anderson puppet show, Supercar is a great place to learn about the history of Supermarionation. That said, Four Feather Falls is a wonderful series which I thoroughly recommend – you can read about how it started a number of Supermarionation traditions here.

For those of you that don’t know, Supercar is about a machine which, yes, is called Supercar. Pilot, Mike Mercury flies Supercar all over the world to help solve crimes, perform rescue missions and generally have exciting adventures. Mike is supported by two scientists, Dr. Beaker and Professor Popkiss, a young boy called Jimmy, and his pet monkey, Mitch. The team also face off against a number of villains intent on stealing or sabotaging Supercar, including Masterspy and Zarin – a criminal duo who get their comeuppance more than once in the series. 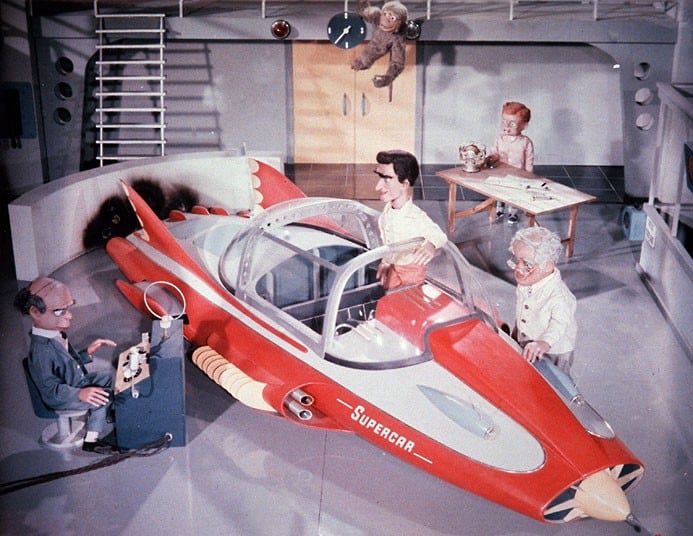 It’s a really straightforward show about good versus evil, and having exciting adventures. The show was extremely popular in the 1960s and secured Gerry Anderson and Lew Grade’s working relationship for years to come.

There are two series of Supercar, one primarily written by brothers Martin and Hugh Woodhouse, the second written by Gerry and Sylvia Anderson. Generally speaking, the first series is a little more grounded in scientific possibility, whereas the second series branches into the realms of sheer fantasy. Both approaches have their merits but for me the first series actually reflects the approach taken in the Andersons’ later shows slightly better.

Here are some of my favourite Supercar adventures.

Bill and Jimmy Gibson, along with their pet monkey Mitch, are stranded in the sea following the crash of their aircraft. Mike Mercury is desperate to take the new Supercar out to rescue them. But with the machine still in such an early, experimental stage, Popkiss and Dr. Beaker question the dangers of taking Supercar out on it’s first mission…

This was the first episode of Supercar I ever saw as a kid. I had it on a VHS tape along with the Joe 90 episode, The Birthday. The Birthday is probably the least exciting of all the Anderson clip shows so you can understand why I chose to fast forward straight through it and watch Rescue instead.

It does everything it needs to do as a pilot episode. The characters and their strong, quirky traits are introduced (aside from Jimmy who basically doesn’t have a personality throughout the series), and the comic elements are amusing in amongst the serious drama. The more melancholy moments in the episode are particularly well done.

JFP Electronics in England are fitting Supercar with a new portable control unit. Disgruntled JFP employee, Harper, steals the printed circuits along with his assistant, Judd. But when Mike lifts off in Supercar to intercept the thieves, disaster strikes as the starboard wing has been sabotaged, leaving the car grounded! 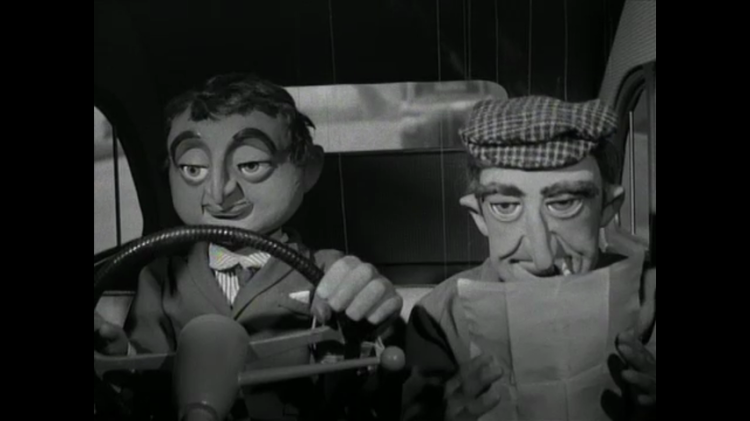 Harper and Judd are a wonderful pair of villains that I wish were used more in the series. You can believe Harper’s pettiness would drive him to criminality, and that Judd is just a jobbing criminal going to where the money’s at. They’re a little more sophisticated and credible as characters than Masterspy and Zarin who aren’t particularly given a back story like this.

I love the scene with Mike cruising down the motorway in Supercar. Despite being very simple, it still makes for an exciting climax to the episode. Prothero’s line is one of the best in the series, “150! One boggles at the thought! And on the Queen’s Highway too…” His underlying tone of – these ruddy Americans, coming along and disrespecting our roads – is just too funny. Over the top lines and characters like this just aren’t as common in the later Supermarionation series.

Mike and Supercar come to the resuce of General Sebastian Caprilo de la Festiola LaGuava, President of the islands of Pelota. He has been overthrown by his brother Colonel Humberto LaGuava, who has transformed the country into a corrupt police state. Mike teams up with the General to help claim back his country.

Something the first series of Supercar does extremely well is not pandering to kids. The stories deal with serious issues and danger in a simplified form. Political corruption is hardly thought of as a subject for children’s television, yet the Woodhouses condense it down just the right amount and make a thrilling adventure out of it.

The insane Colonel Humberto LaGuava character is great fun while also being thoroughly nasty. The gunfight at the climax of the episode is unusual in that weapons aren’t often used in Supercar, but it’s a nicely done bit of action without being too gratuitous. Overall this is an exciting episode, with entertaining guest characters and a tense atmosphere.

The Lost City
Story by Gerry and Sylvia Anderson, Directed by Alan Pattillo

On their way to the South Pole, Mike, Jimmy, Mitch and Dr. Beaker are diverted off course and brought to a landing in the ruins of an ancient city. Mike and Beaker stumble across a mad scientist, Professor Watkins, and his army of robots living under the city. Watkins reveals his plan to fire an atomic missile at Washington DC, leaving only the Supercar team to try and stop him.

This is one of Gerry and Sylvia Anderson’s silly episodes. The mad professor and his robots are, of course, classic science fiction elements which one feels the Andersons are attempting to parody here – at least that’s how they come across. But it is rather good fun despite being a bit far-fetched. The Woodhouses attempted to ground the science in their episodes in some kind of fact and logic, whereas this episode definitely falls more into fantasy.

Watkins and his robots are extraordinarily over the top, as is the climax of the episode with Supercar chasing the atomic missile. Other highlights include Mike’s big hat, and a robot walking away sulkily after getting told off by the professor. It’s a big, bold adventure with big and bold characters. It offers us some of the great action for which Gerry Anderson is famous.

The White Line
Story by Martin and Hugh Woodhouse, Directed by Alan Pattillo

Gangsters Maxie and Joe Hoyle have been forcing Safe T Cars security vehicles to crash off the road in order to commit robberies. Scotland Yard enlist the Supercar team to help crack the case. Dr. Beaker is given the task of driving a truck along the same stretch of road to catch the criminals in the act! 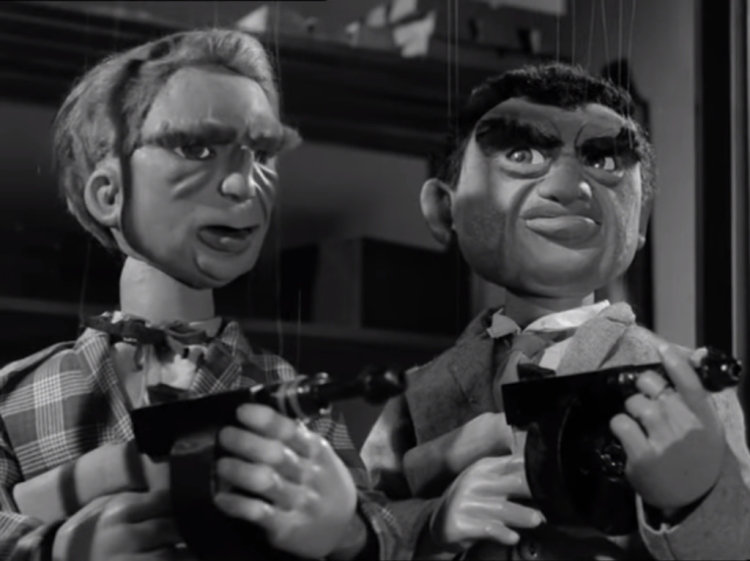 The final offering from Martin and Hugh Woodhouse for the series is a story wrapped up in crime and suspense. It’s quite a grown up story that happens to be told using puppets. Speaking of which, the puppetry and the special effects by this point in the series had advanced quite considerably.

A lot of the incidental music from this episode is taken from Barry Gray’s score for the Gerry Anderson produced B-movie, Crossroads to Crime. Arguably, the score is one of the better aspects of that particular production.

Mike and Beaker take Supercar to investigate an emergency call. They discover a creepy old house, occupied by one Professor Karloff. They soon discover at their own cost that Karloff has the ability to miniaturise people to one third their normal size!

This has to be the bizarrest episode of Supercar and is another example of the Andersons’ more fantastical approach to the series. It’s the first of a triology of Supermarionation episodes that see the characters at greatly reduced stature. The other episodes are Fireball XL5‘s The Triads, and Stingray‘s Tom Thumb Tempest. It’s a totally surreal idea but does make for some fun and creative stories.

Professor Karloff is one of the most terrifying Supermarionation characters ever created and is completely off his trolley with his plan to become the ruler of a land of miniature people. The second series of Supercar does offer some wonderfully crazy villains which are great fun to watch.

Ultimately I have to recommend Supercar as being a really entertaining series which, whilst aimed at children, is enjoyable for all ages. Of all the monochrome series, this is the one for me that sets the high standard of storytelling which forms the crux of all the best Supermarionation productions. Martin and Hugh Woodhouse were very good writers and it’s a pity their relationship with the Andersons ended so abruptly after the first series.

Do you have a favourite episode of Supercar, or do you prefer shows like Fireball XL5? Comment below with your thoughts!