Hello again! The combination of moving house recently and a busy work schedule means that I have not been able to focus on writing for this blog as much as I would have liked. With things settling down a bit now, and after a few recent happenings, I am fired up once again to bring you Anderson-themed musings.

Today’s post has to do with my recent house move and my opportunity to realise a dream I have had for a long time. Say hello to my new office. 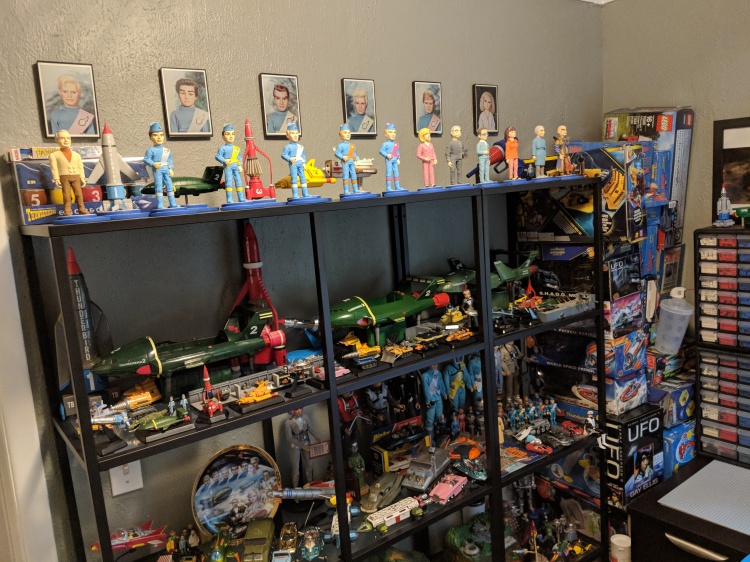 I call it an office, it’s more of a man cave which spares the rest of our house from being cluttered with memorabilia from Gerry Anderson shows. Most of this stuff has lived in boxes for the past two and a half years after my move from the UK to the US. Before that much of it resided in my parents’ attic because of limited space. I have been collecting basically since birth. A lot of the toys you will see are mine from when I was a kid, and some are even hand me downs from my older brothers. Many items are far from being in pristine condition but the achievement is more in the fact that I have been able to hold onto them for this long, and that they survived the transatlantic shipping process.

Time for a tour! Let’s start with the basics. The room is about 7′ x 10′ and before moving anything in there the entire hardwood floor had to be refinished due to some very careless painting in the past. The desk was about to be thrown away at my “real life” job so with great difficulty it was transported here. The shelving and the chair are from IKEA.

One corner is dominated by empty boxes. Yes, I took most things out of their boxes to put them on display. They look prettier that way. I kept the boxes for posterity, though.

The desk is mostly dedicated to my LEGO hobby. Yes, I also dragged an enormous collection of LEGO bricks across the Atlantic too. All the pieces have sorted and organised into drawers and boxes to make the process of building MOCs that little bit easier. You can also spot my own, custom built LEGO vehicles from The Investigator among many other things. The monitor and speakers are only connected to a Google Chromecast device. I deliberately chose not to have a full PC set up in this room because I want it to primarily be a space to enjoy my collection and work on LEGO builds, rather than constantly checking social media and emails and the like. The monitor is mostly there to display reference images for LEGO builds which I can cast from my phone via the Chromecast. When not in use, the monitor displays the sci-fi artwork of Chris Thompson. 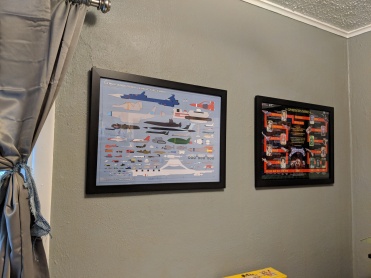 Speaking of which, above the desk hangs one of my favourite pieces of Anderson artwork. Chris’ incredible vehicle size chart which showcases a vast selection of aircraft, ground vehicles, submarines, and space satellites from across the entire Gerry Anderson canon. I find myself staring at it for hours at a time. Next to that is a Terrahawks poster, also designed by Chris which came from the Big Finish table at Andercon 2015. Dominating one wall is Eric Chu’s incredible Thunderbirds movie-style poster which I was lucky enough to have signed by David Elliott, David Graham, and the late Jeremy Wilkin at Andercon 2015. I have all sorts of other posters and signed photos stashed away but there’s only so much wall space.

The final artwork piece is much more personal. A few years ago, Fanderson ran a ‘design a pod vehicle competition,’ with the winner getting to have their vehicle built out in 3D by Chris Thompson and signed by Gerry Anderson. In the end, the club decided to have all of the entrants’ artwork realised by Chris and presented to Gerry for signing. It was not long after I received this piece that the news broke about Gerry’s Alzheimer’s diagnosis. I will always feel incredibly privileged that he took the time to look over and sign this piece of artwork. I was never fortunate enough to meet Gerry properly besides us bumping into one another on the way into a convention. So this may not be worth much to anyone else but it carries a lot of significance to me, in part because it is completely unique, and I’m grateful to Gerry, Chris, and Fanderson for making it happen.

Onto the bulk of the collection, and I’ll spare explaining every single item to you but will try to give a rough summary of what is on each shelf as well as any items of particular interest.

Above the shelves I have framed the famous portraits from the series one set of the Tracy lounge. These postcards were a backer gift from the Thunderbirds 1965 project and look absolutely cracking. Maybe one day I’ll take copies of them, punch holes in the eyes and replace them with light bulbs that beep every time I receive a phone call. Standing atop the shelf itself is a complete collection of Thunderbirds statues from the early 2000’s. Unfortunately that’s all I know about them. I have all the boxes but not one of them states the manufacturer or any other information. Each statue was limited to 10,000 copies so these aren’t all that rare, but they’re not exactly the prettiest pieces – particularly the rather hideous vehicles. That said, they were a lot cheaper to collect from eBay and car boot sales than the Robert Harrop equivalents.

The next shelf is dominated mostly by my collection of Konami models, and the various supersize Thunderbirds vehicles including those from the 90’s, early 2000’s, and I even have a small section dedicated to the 2015 Thunderbirds Are Go TB2, and all of the little toys that came free with the Thunderbirds Are Go comic. I have not had a good opportunity to collect much merchandise from the revived series.

The shelf below is probably the biggest hodgepodge of the lot. The left hand side consists mostly of Dinky toys in varying conditions. My Product Enterprise collection consists of Supercar, Fireball XL5, an SPV, a SHADO Mobile, and the Lt. Gay Ellis talking figure. All of these were bought before Product Enterprise went out of business and the prices for their models tripled on eBay. My Robert Harrop collection consists of just an X-20 from Stingray, and the lovely little Dick Spanner produced for the first Andercon. 12″ figures from Thunderbirds and Captain Scarlet stand proudly at the back – towering over smaller figures from Terrahawks, Thunderbirds, Stingray, and a few from Captain Scarlet. Vehicles from Terrahawks and New Captain Scarlet finish off this section.

Below that is a collection of Tracy Islands. I’ve written about these in more detail in this article. I have never had the opportunity to display all of them at once so this is pretty special. A small corner of this shelf is also dedicated to pieces from Doctor Who and Red Dwarf – collections I would love to expand one day.

The final shelf is a mixture of Space Precinct, Stingray, and then various bits and bobs which didn’t quite fit anywhere else.

Then, because it was too darn big to fit on the shelves, we have the 2001 Cloudbase surrounded by all sorts of other Captain Scarlet pieces from the 90’s and early 2000’s on top of an IKEA chest of drawers which have spare bedding and all that sort of thing in them.

Finally, a few pieces have not found a permanent home. These are a Captain Scarlet Spectrum Command Team set, a Thunderbirds Rescue Pack, a set of those same vehicles in gold, and finally a Pelham puppet of Twizzle from Gerry’s first puppet series, The Adventures of Twizzle. This puppet is in superb condition considering its age and actually looks better than the original puppet that was used on-screen. I hope to find a way to hang him up safely on display, but right now he lives in the comfort of his original box and tissue paper.

If there are any items you really want to take a closer look at from my collection, just post a comment below. If you have a room dedicated to your Gerry Anderson collection I would love to see that too.

Stay tuned for more reviews and articles coming soon and let me know what you would like to see next!