‘Lavender Castle: A place of legend, fabled right across the universe.’

This Gerry Anderson series seems to live up to its tag line of being a bit of a lost legend. For a long time I knew nothing about Lavender Castle beyond its title until I bought the DVD a few years ago. I had guessed from the title that it might not be like other Gerry Anderson shows whose titles immediately suggest a focus on futuristic machines or organisations. Lavender Castle seemed like something in the realm of magic and fantasy, not the usual Gerry Anderson formula. But when I watched it for the first time I realised that this series wasn’t so different from other Gerry Anderson shows, but also had something very special and unique about it.

Being born in the mid 1990s, Lavender Castle should have been my first exposure to a new Gerry Anderson show when it aired in 1999 and 2000 on CITV. I would have been the perfect age for it and watched CITV pretty regularly and yet have absolutely no recollection of seeing the series at all.

It turns out that not many Gerry Anderson fans have seen or tend to discuss this relatively recent series. Why? Well there are all sorts of reasons for this, and none have them have anything to do with the quality of this beautifully made show. It mostly comes down to the show being a ten minute part of a whole afternoon of television shows for children on ITV and could have easily been missed. It’s an off-putting slot for older fans. It suggests a show that is exclusively for young children when most Anderson series are aimed at a family audience of all ages. Sadly, ITV failed to learn from this and multiplied the problem considerably when scheduling Gerry Anderson’s New Captain Scarlet (2005), and even now, CITV’s Thunderbirds Are Go (2015) hardly seems entirely suited to its early morning timeslot. 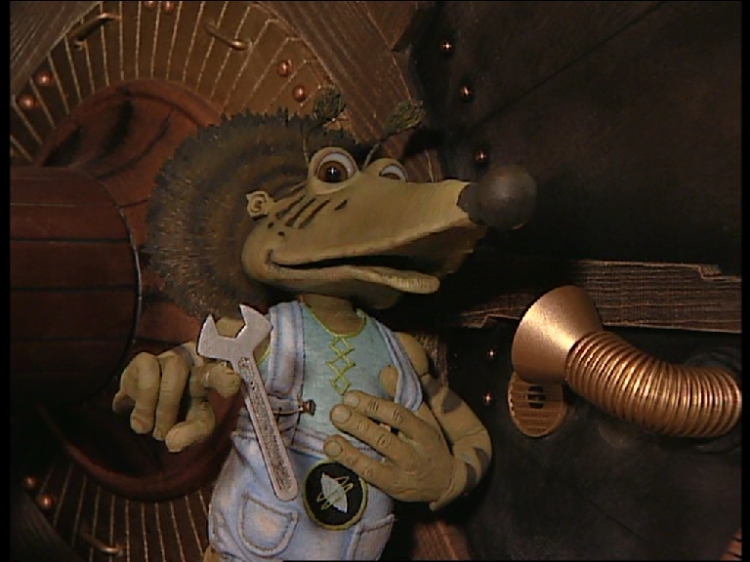 The result of this unfortunate scheduling, and a title that doesn’t suggest that this follows the traditional Gerry Anderson formula, is a show which seems to have been forgotten by fans despite being very strong in a number of areas. In this article I hope to make the case for Lavender Castle and encourage others to give it a try.

The basic premise of the series is a simple battle of good vs. evil mixed in with an incredible quest. It’s pure fantasy and perhaps this is where the series differs from previous Gerry Anderson series which had always tried in some way to ground themselves in reality. As much as fantastical things happen in shows like Thunderbirds or Space: 1999, one always pictured them as an alternative view of the world we live in. Lavender Castle diverts from that idea and puts us into a completely different universe to our own, but retains the good vs. evil and advanced technology themes that Gerry Anderson shows are famous for.

This different approach comes from the fact that the concept and characters for Lavender Castle were pitched to Gerry Anderson in the late 1980s by fantasy artist Rodney Matthews. They developed the idea together for many years with Matthews contributing all of the design work. Following rejections from the BBC and Carlton Television, the series was eventually picked up in 1996 by Carrington Productions International who financed the project which was produced at the world famous Cosgrove Hall Films. 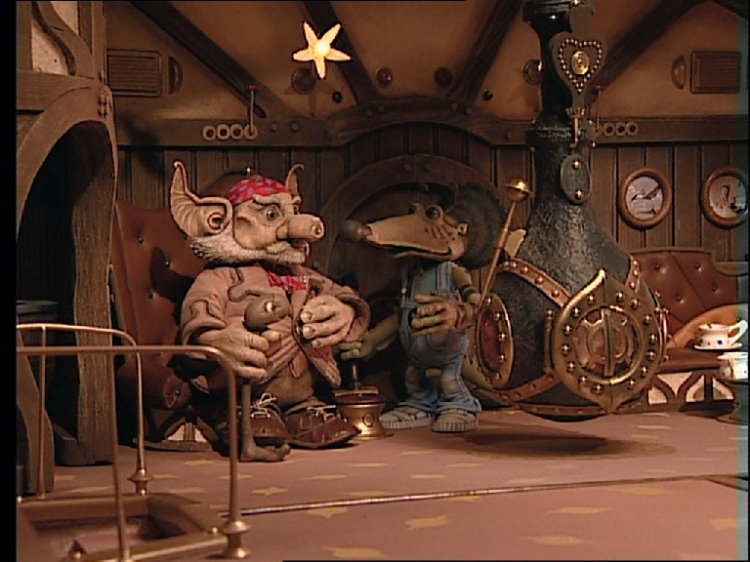 The series was produced using a combination of outstanding stop-motion animation and CGI animation. Mackinnon and Saunders, who have since built the puppets for the upcoming Anderson Entertainment pilot Firestorm, constructed fully articulated puppets closely based on Rodney Matthews’ sketches. The stop-motion work is immaculate, bringing the characters to life with precision and artistry while retaining the charm of earlier Anderson shows.

Thrice is the captain of the Paradox. He’s an older creature with three eyes and a warm heart. He’s a caring and wise father figure with a special knowledge of Lavender Castle.

Captain Thrice is assisted in his mobility and decision-making by a walking stick that can talk. It was carved from laplon wood by Thrice and mysteriously given life by Lavender Castle.

The key pilot of the Paradox is Australian-accented Roger. He was formerly a decorated starfighter pilot. After being captured he was rescued by Captain Thrice and joined the crew. 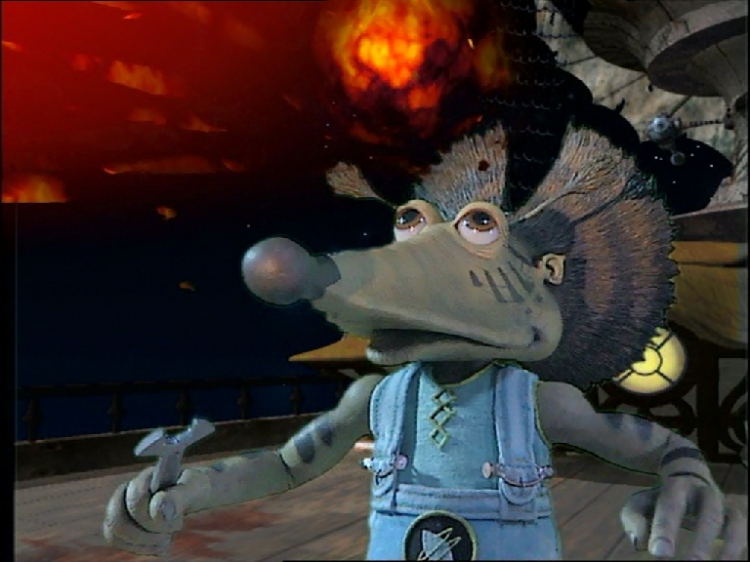 The ship’s Scottish engineer. He has a passion for inventing and caring for the Paradox. Roger and Issy are good comrades. 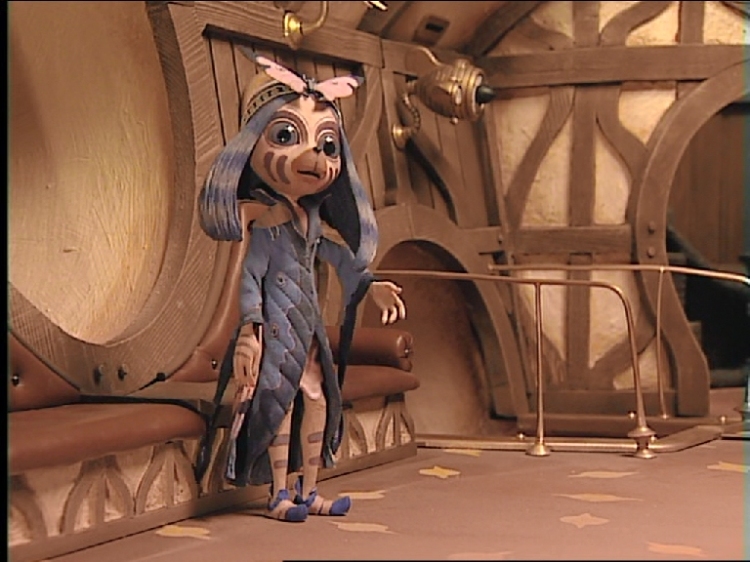 Lyca is a beautiful creature with butterfly wings allowing her to fly. She is a Floran biologist and medical specialist who serves as a doctor on the Paradox. Alongside Roger she was rescued from capture by Thrice.

A robot fitted with an Outel processor and housekeeping technology, knighted by Queen Zarla. ‘Squeaky’ as he’s affectionately known takes care of all housekeeping duties onboard the Paradox.

Sproggle is an orphan with child-like innocence who struggles as the navigator of the Paradox. He has trouble telling left from right which oftens causes the ship to go off course into all sorts of unexpected adventures.

Dr. Agon is an evil mastermind who commands the Dark Station. He will stop at nothing to destroy Lavender Castle. 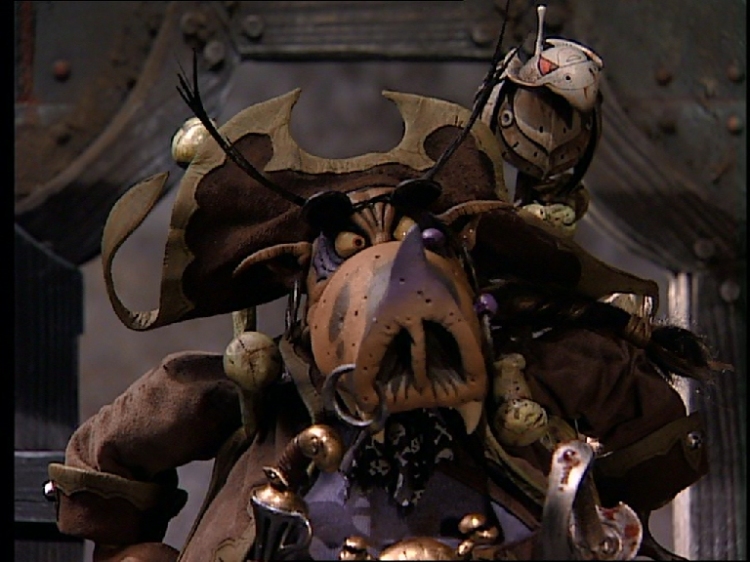 Fred is a one-legged pirate sailing the Galak Sea in an anicent galleon called the Cutting Snark. He answers to Dr. Agon and often attempts to thwart the Paradox crew.

As you can see, the characters are fantastic pieces of design by Rodney Matthews. Much like the characters of earlier Anderson classics, it’s pretty clear cut which side they’re on. The heroes are dependable, intelligent and brave. The villains are nasty, ruthless and misguided. Good always triumphs over evil. The Paradox crew are a good team and, like many other Gerry Anderson shows, a family-like unit. They’re mismatched and some members of the team are stronger than others, but when combining their efforts they are more than a match for Dr. Agon.

The technology in the series is wonderfully inventive. The Paradox is essentially a cottage with engines strapped to the back. A great machine to inspire a child’s imagination. Dr. Agon’s Dark Station is an enormous black fortress which could not look more evil. The station’s shuttle craft is known as the Mammoth Machine which releases huge black clouds of smoke as it chugs through space. They are machines of absolute fantasy which don’t resemble any vehicles of the real world. Determining how they work is an act of pure imagination which may be less satisfying for those inclined towards pure science in their Anderson shows, but if you love Thunderbird 2 and don’t care how it takes flight, then Lavender Castle‘s fanciful approach to space travel might just be your cup of tea.

Gerry Anderson often re-used voice artists on multiple series, but in this case all four cast members (David Holt, Kate Harbour, Jimmy Hibbert and Rob Rackstraw) only worked for Anderson on Lavender Castle. They are, however, recognisable in many other children’s television series of the time and are incredibly versatile, sharing the main roles around seamlessly. They voice the characters with great integrity and humour. The same qualities exist in Crispin Merrell’s music which is an enjoyable highlight of the series – a full release of the soundtrack would be a wonderful thing.

Ultimately, Lavender Castle may not be instantly recognisable as a Gerry Anderson series with it’s use of stop-motion animation, an all new voice cast and pure fantasy universe. At its heart, however, the show has a lot of the same themes and elements commonly associated with the Supermarionation series. The episodes are produced to an incredibly high standard with stunning design and loveable characters from Rodney Matthews, exciting adventures, and a simple battle of good versus evil. I urge any Gerry Anderson and/or fantasy fans to give this series a try. It is a worthy addition to the Anderson canon which has its own unique charm and continues the producer’s desire to push the boundaries of high quality film-making.