Terry Adlam’s robotic private eye, Dick Spanner, was brought to life by Gerry Anderson’s team at Bray Studios in 1986 using stop motion animation. LEGO and stop motion animation have a long history, and Dick Spanner P.I. is an absolute cracker of a series full of tongue-in-cheek humour, so I thought it was about time I captured the character in LEGO form. 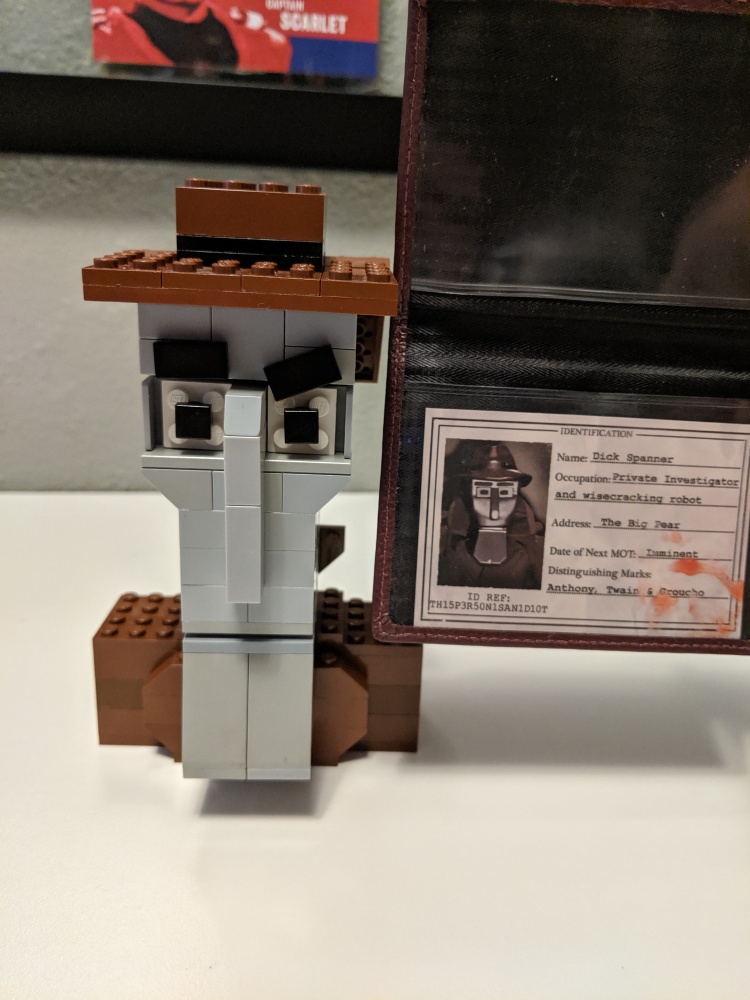 As ever with my LEGO MOCs, I started with no plan or designs. For reference, I had Robert Harrop’s charming figurine of the character in front of me and I consulted a few clips from the series. The size of the model was dictated by how much functionality I felt needed to be built in. I wanted to be able to adjust the features of the face just like the original puppet with movable pupils, eyebrows, and mouth. The eyes were, therefore, the starting point. Black 1 x 1 tiles were chosen as the pupils to be positioned in the centre, or corners, of the 2 x 2 white plates that formed the rest of eyes, making it possible to capture the sideways looks Dick would often give to the viewer. 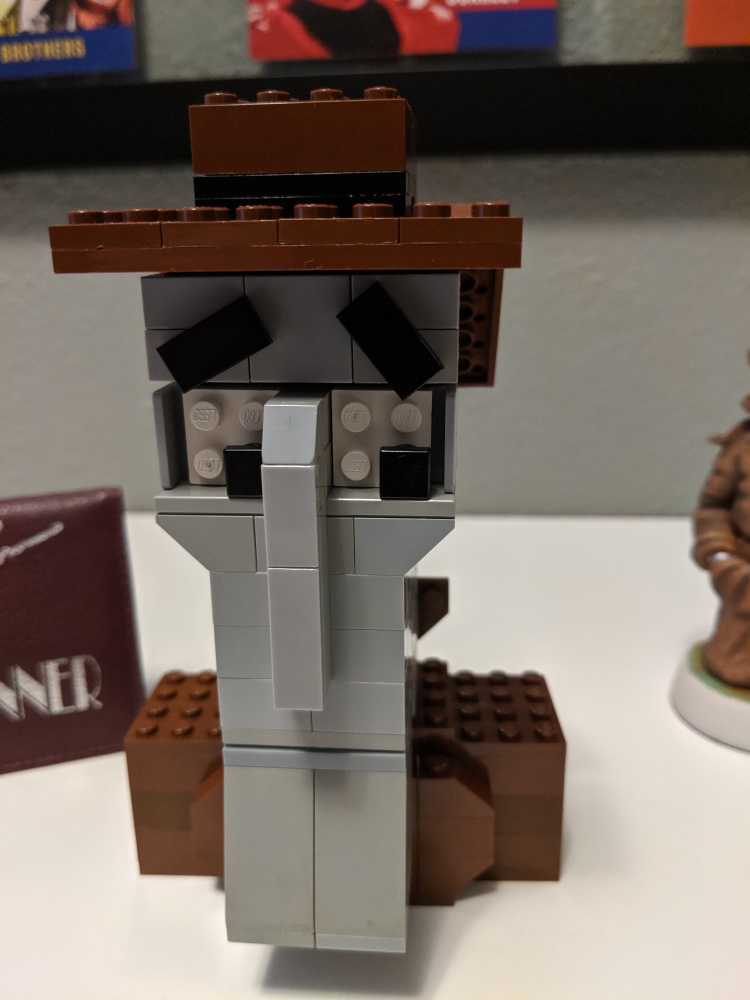 Working out the size of the rest of the face was relatively easy once the eyes were in place, building downwards towards the mouth which was constructed on a simple hinge. The nose, eyes, and eyebrows are all attached using SNOT (Studs Not On Top) construction. The eyebrows are simply two 1 x 2 black tiles which are able to slide around on two 1 x 2 jumper plates underneath. Around these key features I filled in the rest of the face with regular grey bricks, and black bricks forming Dick’s crisp hairline. 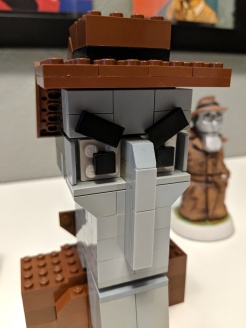 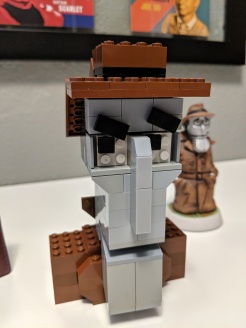 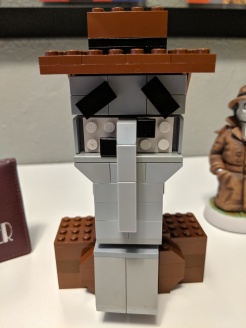 The top of the head was originally built completely square and flat until I realised that the slight floppiness of Dick’s hat wouldn’t be captured if I sat it straight on top. The back of the head therefore became slightly sloped with a few studs exposed in order to attach the hat which was built in two parts in order to appear suitably flexible. 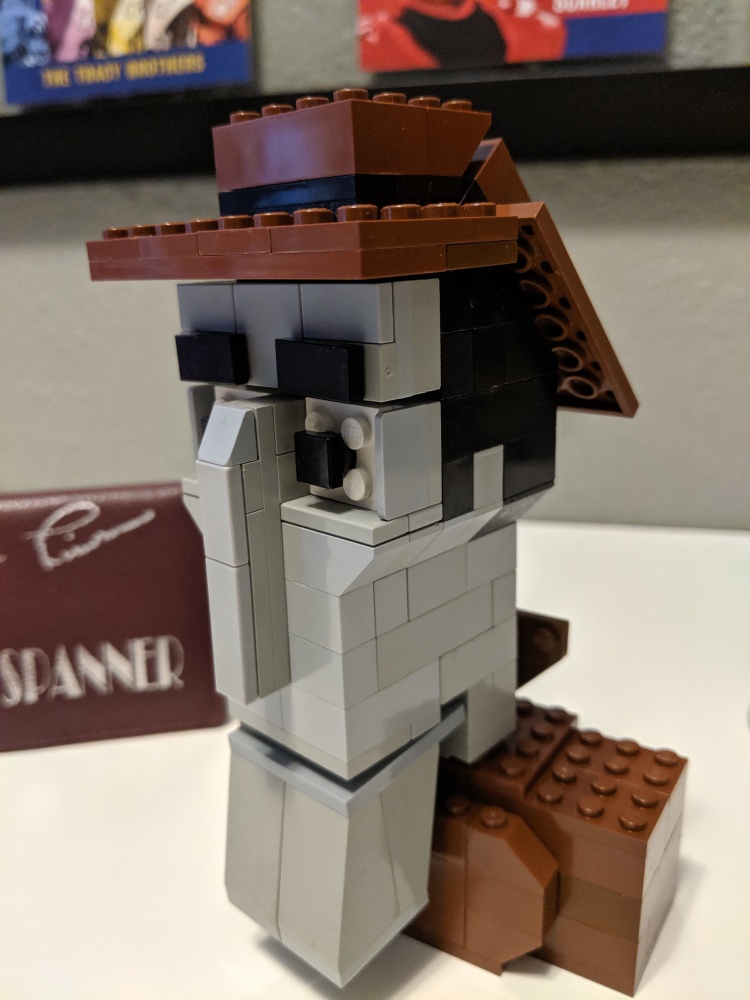 A small 2 x 2 turntable piece was then fixed to the base of the neck so that the whole head could turn from side to side on the shoulders. It was at this point that I was confronted with the tragic paucity of my selection of brown LEGO bricks. My hopes of constructing a full body for Mr. Spanner were dashed. Using the few bricks I had remaining I was able to construct a small set of shoulders, and use an angled plate to suggest a collar.

Of course, he does look rather splendid as a simple bust, and I’m absolutely chuffed I was able to fit so much expression into a relatively small build. That said, I am confident Dick’s head will be united with a body to match. Let me know if you feel like donating funds to this oh-so-worthy cause…

As a bonus, and at the request of Andrew Clements (who must still be besides himself with joy that the 2004 Thunderbirds movie is coming to blu-ray), I have produced instructions for this little build so you too can have a Dick head sitting on your shelf…